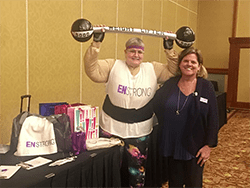 The ENA Foundation is accepting applications for grants and scholarships as follows: ENA Foundation/Sigma Research Grant – now until March 30, 2020 Academic Scholarships – now until April 28, 2020 EN 20 Conference Scholarships – March 16, 2020 until April 13, 2020 Seed Research Grants ($500/project) – August 1,2020 until September 30, 2020 Please visit the ENA Foundation at www.ena.org. Thank you to Tobin Miller and AMR, Judy Scott and Diane Schertz for donation of today’s prizes for the Opportunity Drawing which raised $300 for the State Challenge.

3. The CalENA Board donated $5,000 to the Judith C. Kelleher Endowment.

5. Huge thanks to Lynn Visser for the donation of books which raised $73 and to San Francisco, East Bay and Loma Pieta chapters, Judy Scott, Louise Hummel, Shelbie Rogers, Patrice Christensen and Diane Schertz for today’s Opportunity Drawing Prizes which raised $480.

6. THANKS to all who participated today in raising a total for $553 for ENAF’s Judith C. Kelleher Endowment!!

May 2022
1. As of May 19,2022, ENStrong2022 has raised $244,190 of the $300,000 goal. Texas ENA leads with $37,978 donated. California ENA is in 6th place with $9,155 pending chapter donations. Reminder that the Board suggested that each chapter donate $2 per member. Chapters need to notify Treasurer Angela Musciello to transfer funds before May 31st. Orange Coast Chapter is currently tied for 1st place with 80 points for Social Media Postings.
2. The ENA Foundation will be sponsoring a Virtual Silent Auction which will begin in August and close during the Annual Meeting. The theme will be RECHARGE. California will participate with a donation. Request suggestions for a prize to fit this theme. Please forward to Diane Schertz at dischertz@comcast.net by 30 June,
3. August State Council Opportunity Drawing will raise funds for the Judith C. Kelleher Endowment.
4. In November we are considering doing a Silent Auction at the Education Event in Yosemite. The State Council Opportunity Drawing will raise funds for the 911 Endowment.
5.Today’s Opportunity Drawing at the State Council meeting raised $860 for the ENStrong2022 challenge. Thank you all for the awesome support and thanks to all for the numerous donation of prizes!!- LA Chapter, Laura Gutierrez, Orange Coast Chapter, Julie Rossie, David Samuelson, Judy Scott, Shelbie Rogers, Cal ENA Board, Diane Schertz and anyone else I may have missed. You are all so generous in your support of scholarships and research grants from the ENA Foundation programs.

1. The Emergency Nurses Association Foundation (ENAF) is accepting applications for Academic Scholarships until April 29, 2022 and EN22 Annual Conference Scholarships until April 18, 2022.
2. The ENA/Sigma Theta Tau Research Grant submission closes March 28, 2022.
3. Submission for Seed Grants opens on September 12 and closes October 21, 2022.
4. The ENStrong Challenge kicked off at Leadership Orientation the end of January and ends May 31, 2022. State Councils, Chapters and individuals may join the Challenge by visiting ENAF or ENStrong @ ena.org. Donations will support scholarships, continuing education and research and may be made at: p2p.one cause.com/enstrong2022/team/california-state-council or visit ena.org and search find my team at ENStrong. The goal is $300,000 and $129,416 has been raised so far with Texas on top of the Leader Board having donated more than $36,000.
5. Thanks to the following for donation of gifts for today’s Opportunity Drawing: Kara Davis and Superior Chapter, Judy Scott, and Sacramento Chapter, Mindy Elayda, Krystal Scott, Blossom Inuenwi, Mary Gannon and Diane Schertz. We raised $575 for ENStrong. Much appreciation to today’s attendees for your support of the Foundation!

1. ENStrong Campaign (State Challenge) will kick off at the State and Chapter Leadership Orientation in Charleston, SC at the end of January and runs through to May 31, 2022. California will pledge $10,000 but of course we want to raise as much money as possible in support of the Foundation. Last year we raised over $27,000. The online donation format will probably continue as it was used last year-more information to follow.

2. Thanks to Inland Empire Chapter and Diane Schertz for donation of prizes for today’s Opportunity Drawing which raised $295 for ENStrong.

3. Prize donation for the next State Council meeting will be the responsibility of the Sacramento and Superior Chapters.

Committee reviewed suggested edits to draft Proclamation template. Debby Rogers will complete changes and develop a procedure on how to engage officials to initiate a Proclamation. These will be forwarded to chapters to use in their local jurisdictions. National ENA has renewed the Membership Challenge for 50,000 members for our 50th year. Various levels of rewards may be found on www.ena.org. California ENA currently has 4707 members with a goal to reach at least 5000 members by Annual Meeting in September. We encourage each chapter and their Fellows to donate memberships to use in recruiting new members. Diane Schertz will work with Janet Williams to determine how the Board wants to implement the 50th Grant Scholarship. One suggestion was that it be used to help mitigate expenses for one member to attend EN 2020. Chris Hewitt and Sarah Wells have investigated doing a 5K event in Monterey on Saturday May 16th following State Council. Working with officials in Monterey revealed the need for insurance. After discussion, the committee decides to make this a less formal event. Individuals interested in participating will meet in the hotel lobby on Friday May 15th at 0630 for a 3K walk prior to the Chapter Rep meeting. Committee continues discussion about possible CA 50th Anniversary merchandise to sale at Annual Meeting. East Bay and San Francisco Chapters have already committed to selling items for their chapters. This item remains open for further investigation. In interest of time, discussion on the November Gala was tabled. Also noted, there has been little response from New York concerning a joint event with California at Annual Meeting. National ENA 5oth Anniversary Video Challenge was presented at State and Chapter Leadership Orientation (SCLO). ENA members or groups may submit a less than three minute video showcasing ENA’s 50th Anniversary. Winning video will be shown during Opening Session in Las Vegas. Desiree Hadden (Palomar Medical Center in Escondido CA) has taken the lead on California’s submission which will highlight our 5 decades. She has arranged for a videographer on Sunday, May 3rd at 5 AM. Those wishing to participate should RSVP to her for further information: desireern1@gmail.com

January 2020
The Emergency Nurses Association Foundation’s 2020 State Challenge Campaign kicks off today and runs through May 31st with the theme ENSTRONGer. 2. Today’s prize donations are greatly appreciated from Orange Coast Chapter, San Diego Chapter, Julie Rossie and Diane Schertz. 3. Currently, $620 are available for the State Challenge and today’s opportunity drawing raised an additional $615. Thanks to all for your generous support.

50th Anniversary Celebration Committee – January 2020
1. Debby Rogers has written a draft Proclamation and requests editorial input from members. 2. State Council attendees received pens and ENA M&M “prescriptions”. Each chapter representative received a packet of pen for their chapters. Inscription on pens state “California ENA State Council celebrates ENA @ 50 and visionary founders Anita Dorr, RN and Judith Kelleher, RN”. 3. State and Chapter Leaders Orientation (SCLO) attendees will receive pens and ENA M&M “prescriptions” from Cal ENA and hand sanitizers from the San Diego Chapter. 4. Thanks to Desiree Hadden and the San Diego Chapter for the “70’s” History Display for the committee’s Decades Project. 5. Chapters are planning local 50th Anniversary celebrations. 6. Screening of “In Case of Emergency” film will be Friday at SCLO with the Premiere in New York during Nurses Week. Future plans for individual state showings are pending further coordination with Carolyn Jones Productions. 7. Diane Schertz donated Judith Kelleher/Anita Dorr Portraits to California ENA Board and each chapter to use at meetings and 50th Anniversary events.

Check out the ENA Foundation’s State Challenge page at https://www.ena.org/foundation/fundraising/Pages/StateChallenge.aspx